She's a ditz; he's a hero. Together, they have to save the galaxy before it's too late. 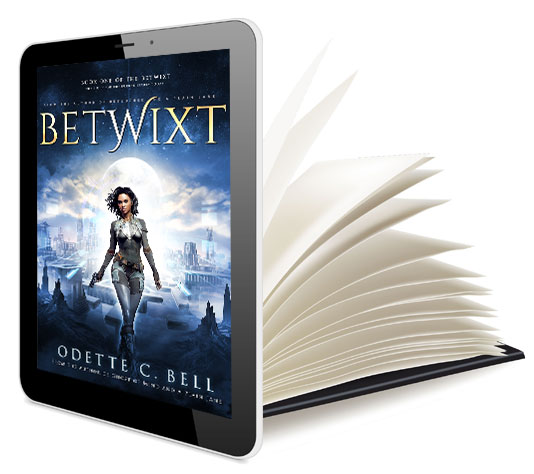 A mysterious past, a grand destiny – can a simple waitress save the galaxy?

Mini’s just a waitress in a dingy space bar. But when her mysterious past comes knocking on her door in the form of a tiny red creature called Od, everything changes. According to him, she’s all that stands between the galaxy and an invasion of soul-sucking creatures from the in-between dimensions. As Mini's galactic experience revolves around serving drinks and smiling at customers, she finds that unlikely.

But Od’s right. So she reaches for the closest thing at hand – a frying pan – and gives saving the galaxy a go. She isn't alone, however; she's caught the eye of a handsome Galactic Military Commander, and he won’t take his eyes off her until the end.

The Betwixt follows a waitress and a stiff-lipped marine battling a mysterious plot to destroy the galaxy. If you love your space operas with action, heart, and a splash of romance, grab The Betwixt Book One today and soar free with an Odette C. Bell series.

Release Date :
2012
Release Date :
This series is complete.
Character :
Soldier
Genre :
Space Opera
Theme :
Who am I
Tone :
Quirky
Back to Series List